Read the full article at: https://www.physics.wisc.edu/2022/09/08/margaret-fortman-awarded-google-quantum-computing-fellowship/

WQI’s Robert McDermott has been elected a 2020 Fellow of the American Physical Society. | Read more at UW Physics

WQI member and materials science and engineering professor Chang-Beom Eom has received a 2020 Vannevar Bush faculty fellowship from the Department of Defense. He’ll use the $3 million in funding to investigate “a new family of quantum materials.”

The WARF named professorship program provides recognition for distinguished research contributions of the UW–Madison faculty. The awards are intended to honor those faculty who have made major contributions to the advancement of knowledge, primarily through their research endeavors, but also as a result of their teaching and service activities.

To learn more about Eriksson’s research, and why he chose fellow UW–Madison alum John Bardeen as the namesake for his professorship, please read the original story.

Wisconsin Quantum Institute director Mark Saffman and his research group are part of a team that will attempt to make quantum computing hardware more applicable to real-world problems.

The up to $7.4 million Defense Advanced Research Projects Agency (DARPA) funding is through the ONISQ program — Optimization with Noisy Intermediate-Scale Quantum devices. ColdQuanta is the primary recipient of the funding, and Saffman’s group at the University of Wisconsin–Madison, along with a national lab and other universities, are partners.

“We’re in this era of development of quantum computing hardware that has been termed NISQ, and that’s because we don’t have error correction running on our quantum hardware,” says Saffman, who is also a UW–Madison professor of physics and chief scientist for quantum information at ColdQuanta. “The question is, can we do anything useful with this? Because the outlook for having a real error-corrected quantum computer that you could run very long calculations still seems to be a long way away, but we have these NISQ machines today, and they’re getting better all the time.”

Saffman’s lab specializes in the development of one type of quantum computer known as a neutral atom quantum computer, in which individual atoms can serve as qubits, or quantum bits. The ONISQ program is looking to apply NISQ-era hardware to complex optimization problems that would be too difficult or time-consuming for a classical computer to solve. In this case, Saffman’s group is taking on a combinatorial optimization problem, known as Max-Cut.

“Very briefly, the problem is, if I gave you a graph with a bunch of locations in the graph that are connected by lines, and I wanted to divide the graph into two sets of locations such that there’s the maximum possible number of connections between locations in one group and locations in the other group,” Saffman explains. “It sounds like a totally abstract mathematician’s problem, but it turns out there are all kinds of practical applications, including logistics deployment, self-organized pattern recognition, scheduling problems — it actually comes up in a lot of everyday things.”

The project is divided into two phases, and the team needs to reach benchmarks in phase one, set by DARPA, in order to continue into the second phase. The most important metric, Saffman says, is one that takes into account the number of qubits on the processor (N) and the number of iterations that underlie how the computed algorithm works (P), or N x P.

“We’re going to be solving this Max-Cut problem using something called QAOA, quantum approximate optimization algorithm. The QAOA involves running a sequence of quantum gates, and so the metric for DARPA for phase one is to reach N times P equals 100, and N times P equals 10,000 for phase two,” Saffman says. “No one has specifically demonstrated N times P equals 100 to my knowledge, so it is an advance, but one that is within striking distance.” 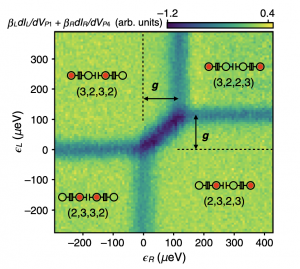 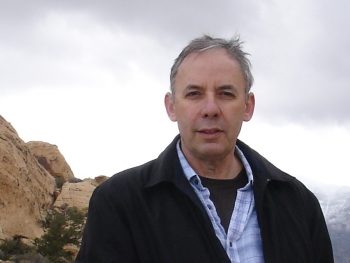 Saffman has developed simplified optical hardware for quantum computing. His technology, recently licensed to ColdQuanta Inc., improves an apparatus for particle trapping, which will reduce the cost and complexity of next-generation quantum computing devices.

An independent panel of judges selected the Innovation Award winners from a field of six finalists drawn from among approximately 350 invention disclosures submitted to WARF over the past 12 months. The winning inventions each receive an award of $10,000, with the funds going to the UW–Madison inventors named on the breakthroughs.

A new publication from the Vavilov group, from A. Barış Özgüler, Canran Xu, is on arXiv! Read the full paper on the arXiv site.

The US Department of Energy recently announced the funding of another set of quantum science-driven research proposals, including that of Sau Lan Wu, Enrico Fermi professor of physics and Vilas Professor at the University of Wisconsin–Madison. With the funding, Wu and her collaborators seek to tap into the power of quantum computing to analyze the wealth of data generated by high energy physics experiments.

Wu, a member of the Chicago Quantum Exchange (CQE) and Wisconsin Quantum Institute at UW–Madison who conducts her research at the Large Hadron Collider (LHC) at CERN in Geneva, Switzerland, was one of only six university-based investigators – those outside of National Labs – to be awarded the DOE quantum funds for particle physicists.

Wu’s research program has one major goal: to discover new physics. This goal requires the identification of rare signals in immense backgrounds. Wu’s group has pioneered the use of machine learning algorithms on standard computers to move quickly and accurately to extract the physics signal. Sifting through the data to find meaningful and incredibly rare signals takes inordinate computing power at LHC.

“However, because of the rapidly increasing volume of data in the future HL- LHC program, our current machine learning algorithms just don’t have enough computing power to conduct complex analyses,” Wu says. “We believe that applying quantum machine learning methods may well be a new direction to go.”

For her DOE-funded project, Wu works with collaborators in quantum information science, including Miron Livny, professor of computer sciences with the Wisconsin Institute for Discovery at UW–Madison, and OpenLab of the CERN IT division. Importantly, she is also collaborating with scientists at IBM Zürich Research. Through them she has access to their quantum computer simulators and quantum computer hardware.

With IBM’s innovative quantum technologies, Wu and her team plan to overcome the challenges imposed by the large, complex datasets generated from the HL-LHC experiments. They will work on quantum feature map with entangling qubits – quantum bits used in quantum computers – to be able to encode the large datasets into the limited number of qubits. They will also work on improving quantum algorithms to advance machine learning, which they expect will lead to advances that have wide-ranging benefits outside of high energy physics.

“Although the era of efficient quantum computing may still be years away, we have made promising progress and obtained preliminary results in applying quantum machine learning to high energy physics with IBM’s resources,” Wu says. “The US government, as well as US industrial counterparts, are planning to invest heavily in quantum computing in order to lead the international competition in the area of quantum information science technology, and we are excited to be able to apply these technologies to discoveries in high energy physics.”

Wu’s DOE grant marks the second to be earned by WQI members this summer. In July, Shimon Kolowitz and collaborators were awarded a grant to identify and mitigate the sources of noise that currently limit qubit performance.

As the field of quantum computing grows, American Family Insurance and the University of Wisconsin–Madison’s Wisconsin Quantum Institute (WQI) keep pace, announcing plans to work together in partnership to expand quantum computing research at UW. …

Read the full article at: https://obe.wisc.edu/news/american-family-insurance-and-uw-madison-queuing-up-quantum-computing-research